In 1982, I met Mark Ritchie and he introduced me to Jim Massey, a legal services lawyer from Minnesota. At the time, I was representing family farmers in their appeals against the Farmers Home Administration, and I was getting frustrated by the biased administrators and the flawed appeal process. I told Jim about the legal theories I was developing to get an injunction against FmHA and I showed him a rough draft of my draft class action complaint. Jim was very supportive! This encouragement meant a lot to me because back then every other lawyer I’d talked to thought I was crazy.

Jim began to do educational outreach first in Minnesota and then to legal services offices nationwide. As set out in the Our History section on FLAG’s website, this is what happened later:

In the summer of 1985, Jim Massey received a phone call from Willie Nelson inviting him to attend the first Farm Aid concert. By the next spring, the first funding check arrived in Jim’s office, signed by Willie Nelson himself, to start a nonprofit law firm with a single mission: Help family farmers stay on their land. It was an investment that helped create Farmers’ Legal Action Group, Inc. – FLAG.

FLAG was incorporated in February  1986 by Jim, Ann Kanten, Dale Reesman, David Ostendorf, LouAnne Kling, and Lee Reno. It has served over 80,000 farmers since then. I love FLAG and I’ve served on its all-volunteer Board of Directors. FLAG has never abated in its work for family farmers and it helps farmers easily keep up to date on the complex mix of state and federal laws. For example, on October 6 FLAG released a free guide telling farmers how to access Covid-19 relief programs. I am in awe of the marvelous work FLAG and its lawyers have done over the years!

And FLAG is but one of hundreds of small, grassroots organizations that are supported by Farm Aid.

I regret that I haven’t attended all of the Farm Aid concerts (the pressures of work wouldn’t allow it) but I have been to quite a few!

I remember that Jim Hightower was the MC at the first Farm Aid concert I attended in Ames, Iowa, in 1993. I joined him and other friends at the “day before” meeting of farm policy wonks that for me is the highlight of the Farm Aid weekend. We were allowed into the catering tent, and I was ten feet away from Ringo Starr!

Earlier that day, I was wandering around vendor booths with Denise O’Brien, of Iowa, who was a farm advocate with Prairie Fire. (Denise is the farmer and farm advocate who founded the Women, Food and Agriculture Network!) I stopped to buy a T shirt and after I bought it, I realized I had “lost” Denise.

When we found each other hours later, she said, “Neil Young asked some of us to come into his trailer to talk about farm policy but I couldn’t find you! Where were you?”

This is the T-shirt that cost me that opportunity. 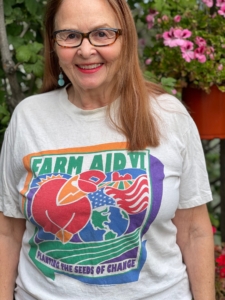 I next attended the 1999 concert in Bristow, Virginia, and I went with a group of farmers and advocates who belonged to the Dakota Resource Council. Prime seating was reserved for the farm advocates and farmers near the front of the stage. As the concert was going on, I looked over and saw Karen Krubb of Farm Aid with her brief case on her knees, and books propped open on the floor, writing longhand on a yellow legal pad. During lulls in the music, I could overhear discussions about supply management. I thought to myself, I’m definitely not sitting with the “fun bunch,” but they sure work hard.

Willie Nelson had come to North Dakota in the early ’90s to do a concert in Grand Forks. At the time, I was the Agriculture Commissioner and I wanted to honor him for his work. I came up with the idea of making him an honorary North Dakota centennial farmer. I also gifted him a basket of North Dakota products, including some sausages that hadn’t been refrigerated for a while. When I told him the sausage might not be good, he said, “Oh that’s OK, the boys on the bus will eat anything!” 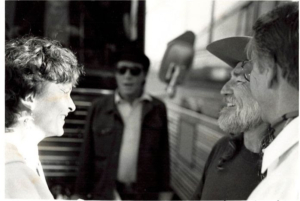 Farm Aid Day at the State Fair happened while I was Commissioner of Agriculture. Willie’s band was the main event at the grandstand for an audience of thousands, but he wanted to convene farmers and advocates to showcase the needs of farmers who were still facing hard times. Before the concert, he held a press conference with me and an array of North Dakota farm and church groups. After the press conference, he beelined to a small child in a wheelchair who was a fan. It was his “Make a Wish” to meet Willie and he did, and he was at the concert that night at a front-row seat specially arranged by Willie Nelson.

One of the Nonpartisan League’s legacies in North Dakota is the nation’s first anti-corporate farm law, which was adopted by an initiated measure passed by citizens in 1932. It has been under non-stop assault by corporate agribusinesses since then, and was under assault in 2016.

Together, Willie Nelson and I wrote a letter to the editor, “Measure 1 Is About the Soul of North Dakota,” which was printed in all of North Dakota’s major newspapers and reprinted across the country. We wrote:

By a 3 to 1 margin, North Dakotans voted to preserve the anti-corporate farming law.

The bright green “I [heart] Family Farms” T-shirt I wore at this year’s Farm Aid was from the North Dakota Farmers’ Union which led the successful campaign to keep corporate mega farms out of North Dakota. 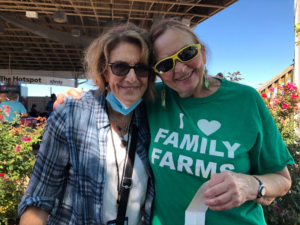